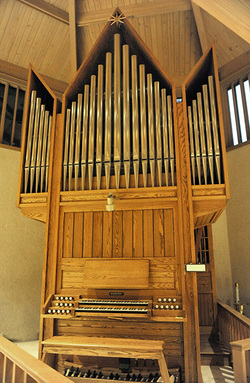 The organ at St. Luke’s Anglican Church was built and installed in 1989 by the renowned organ firm of Gabriel Kney and Company of London, Ontario, Canada.  Originally, the instrument was placed in the rear gallery.  In 2000, following the remodeling and expansion of the sanctuary, the organ was moved to its present location.

The organ has 20 stops and 22 ranks of pipes. In total it has 1100 pipes. Most of the metal pipes are of tin and lead alloys; some of copper, some of brass. The wooden pipes are made of mahogany and pine.

The case design and placement of the pipes illustrate a classic principle called “Werkprinzip.”  This means that the pipe groups for the three tonal divisions, Great, Swell, and Pedal, are placed within their own casework to enhance their distinctive tonal characteristics and to project their sound with clarity.  In this organ the Swell is the group of pipes placed behind louvers and directly above the keyboards.  The Great organ is the larger upper section located behind the beautiful façade pipes that are made of 80% tin.

The largest pipes of the organ are in the Pedal and are placed behind the instrument in their own case.

The casework itself is made of Appalachian oak. Additional woods for the interior are white pine, tulipwood, basswood, and mahogany.  The naturals keys are covered with cow bone veneer, and the sharp keys are made of ebony wood.  The draw knobs for the mechanical stop action are made of rosewood.

In 2011, a Zimbelstern was added as a crowning ornament to the top of the casework. The name means “bell star”, and the rotating star can be clearly seen when this stop is engaged.  The star itself does not ring the bells.  There are eight little bronze tuned bells   that cover the span of an octave.  Rotating brass clappers ring them, and their high-pitched sounds provide additional brilliance to joyful-sound registrations.

In addition to the accompaniment of hymn singing and Anglican music, this organ is particularly suited to organ literature of the 17th and 18th centuries (such as Bach, Handel, Wesley and many others), yet it is also very capable of playing literature from the 19th to the 21st centuries.